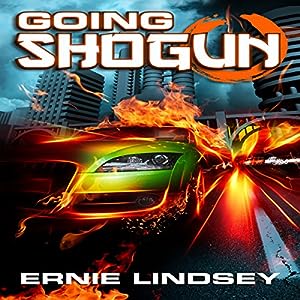 Publishers Summary:
On the run. Out of time. A brownie recipe worth millions.
Lovable loser Chris waits tables by day and dreams of making something better of himself by night. But, under the almighty, oppressive rule of The Board and their divisive caste system, it's nearly impossible. That is until his super-geek pal and fellow waiter, Forklift, hits upon a foolproof scheme: steal their employer's ultra-popular, top secret recipes and sell them on a black market internet site.
It's all fun and games until the mysterious death of a local hacker shatters their surefire plan, sending them on a fast-paced adventure through the city's seedy underground, where they hope to salvage what's left and avoid capture by the Board Agents at all costs. Nobody comes back from that. Nobody.
©2013 Ernie Lindsey (P)2014 Ernie Lindsey

My Thoughts:
Listening to Going Shogun is the most fun I've had in ages.  I'm on my third time listening and I'm still giggling and grinning.  I love Ernie Lindsey's sense of humor and his ability to tell a story so vividly I feel as if I'm there.  I was totally entertained by the adventures of Chris (aka Brick) and his best friend Forklift and their world dominated by a controlling government agency called The Board.  Chris seems to be an ordinary young man looking to better his station in life.  Forklift, with his buck teeth and zebra striped hair stands out in a crowd, as Chris puts it "like a French fry in a basket of Tater Tots." Forklift also has a unique jargon which he seems to invent as he speaks.  I love the street slang and names that were just plain funny, like the garage band Grime and Punishment or the country band  Tale of Two Kitties.

I have the Kindle version and I had to check it to determine if the adventurers are going to Urine Town or You're-in-Town.  But reading Going Shogun it and hearing DJ Holte's performance is  like the difference between watching a black and white movie on a 19" TV  and then watching it at the theater in full color with surround sound. His performance is perfect with a unique voice for each character.  He is able to capture the emotion of the moment, whether the characters experiencing danger,  excitement or romance.

The review copy was provided to me by DJ Holte.   Below is a review video he created.


I give Going Shogun  5 stars and highly recommend it with a warning:  Every audiobook you listen to afterward will seem mighty dull.

Judy Purdee
I have always loved good fiction and now I'm addicted to audiobooks. Mowing the lawn is such a pleasure while I'm walking The Green Mile with John Coffy or confronting a fugitive with Stephanie Plum or experiencing The Hunger Games with Katniss Everdeen.